Today, you are loved.  The measure of Jesus’s love for you is calibrated by the love that His Father had for Him.  So, look up; Jesus loves you deeply.  Abide in His love.  (John 15:9-10)

It’s amazing to think of the day of one’s death as a good thing.  But, this Good Friday is good because the only One who is good, became sin, so that in Him, we are aren’t good might become good.  It’s an amazing exchange.  I hope you have a great day admiring Jesus for what He’s done to make you good.

If you’re able, join us at Crestview tonight as we celebrate Good Friday at 6PM. 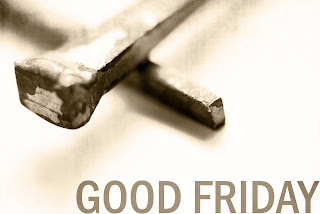 In the Pillar NT Commentary on John

Jesus lays down his life in order to take it up again. Jesus’ sacrificial death was not an end in itself, and his resurrection an afterthought. His death was with the resurrection in view. He died in order to rise, and by his rising to proceed toward his ultimate glorification (12:23; 17:5) and the pouring out of the Spirit (7:37–39) so that others, too, might live.

Good Friday is always one of those days of mixed emotion.  John 19:37 says that Jesus was pierced to fulfill Scripture and that Scripture is Zechariah 12:10.  Looking upon the one we’ve pierced and mourning.

Make no mistake.  We pierced Him.  Sure, a Roman guard was the agent doing the deed, but it was our sin that put Him there.  I was meditating on this text again and read this helpful piece from the Gospel Transformation Bible on Zechariah 12:10-13:9:

“Mourning for sin comes through a pouring out of God’s grace and spirit (12:10). Repentance is a gift from God, worked by his Spirit, not an attitude that we drum up. Our sins have pierced the Lord not just metaphorically but literally, as our sin was paid for at the cross. That reality should make us weep over our personal sin, as well as the sins of others in our community. Yet the cross denotes not merely the sad reality of what we have done to God but also the triumphant reality of what he has done for us. At the cross, my sins pierced Christ, but the blood which flowed from his wounds forms a cleansing fountain that washes away all of my transgressions (13:1). As we confess our sins in true repentance, the blood of Christ purifies us from all our unrighteousness (1 John 1:9). For that reason, when we fix our eyes on the cross, we not only mourn for our sins, but we also glory in the grace of God that saved us and which will ultimately renew all creation.

“The Good Shepherd that the Lord provided would be struck down (Zech. 13:7), resulting in difficult times of testing and purification for the flock. This prophecy is fulfilled in the death of Christ and the scattering of the disciples that followed (Matt. 26:31). The Christian life is a constant experience of trials and difficulties, yet these afflictions are God’s means of refining his people and setting our hearts firmly on our heavenly home. And through it all, we know that our trials are not to punish us in anger but to train us in love. For Jesus was punished on our behalf, so that every trial can only be from a heavenly Father (not a detached Judge), for our good.

This Good Friday, let’s fix our eyes on the cross and not just mourn over our sins but glory in God’s grace that saved us and will one day make all things new.

Our church is privileged to join together with Union Valley Bible Church for a special Good Friday Service coming Friday, April 6 at 6:45PM.  This service will be held at their building on the corner of 30th and Halstead.  I invite you to come and celebrate Good Friday with us.

Lots to think about today on this day of anguish and misery, thinking about our sin putting Jesus on the cross, but also a day in which our redemption was finished as “It is Finished” was declared:

On Thursday night in Gethsemane, Jesus was arrested—betrayed by one of His own disciples and abandoned by the others. The Chief Priests and the Sanhedrin called for secret trials in the dead of night, and the verdict handed down was that Jesus would be crucified. This was something the Roman Prefect, Pontius Pilate, would have to execute. And reluctantly, he did.

After a severe beating, Jesus was nailed to a cross where He’d remain for six hours until dead. Never before or since had more been lost and gained at the same time as at Jesus’ crucifixion. The world gained the atoning sacrifice of Christ. But for those present, either the significance of the moment was lost on them or their hearts broke because the One they believed to be the Savior of the world was dying at the hands of Rome. They couldn’t stop it and they didn’t realize it was for them. They hoped in Him, and though He had told them He would suffer many things and rise three days later, (Mk 8:31) how could they have possibly known this was what He meant?

As we prepare to celebrate Christ’s resurrection, we turn our eyes to His death.

1. What happened to Jesus before the cross?
2. What do you think Jesus was thinking and feeling?
3. How did Jesus die?
4. What did they do with Jesus’ body?
5. What did Jesus have set before Him that helped Him endure the cross?

As you finish talking, it might be quiet or somber or more serious. Don’t feel rushed to change that. Let the death of Jesus weigh on you as you wait for Sunday – the day we celebrate that Christ has risen and is alive, the day that shows He has authority over sin and death. Amen!

Ponder what these events mean and seek to glorify Jesus as you join others to worship tonight. If you’re able, please join us at Crestview for our Good Friday Service at 7PM.

…especially tonight at Good Friday Services. Kevin DeYoung has an excellent post today on paying attention to the familiar, which has many similar emphases as I had in my sermon this past Lord’s Day on Drifting.

What an amazing weekend!

We began with Good Friday service at UVBC and enjoyed a great night thinking about the cross and fellowshipping with others.

On Sunday morning, I read Isaiah 53:8-12 and we sang “Come People of the Risen King” to bring in our morning festivities. After this, we had a church wide brunch, then Sunday School (my class watched Piper preach a sermon: I Have Seen the Lord), then AM Worship.

One of the biggest weekends in the life of our church happens this weekend as we celebrate the Gospel: Jesus life, death and resurrection.

The celebration begins tonight as we join Union Valley Bible Church at 6:45PM to have a Good Friday service, remembering our Savior’s great sacrifice on the cross. (We will be meeting in their building at the corner of 30th and Halstead.)

On Sunday AM, we will have the following schedule:
8AM – Easter Greeting / Brunch
9AM – Sunday School
10:15AM – Worship
(We will have no evening activities on Easter Sunday)

Hope to see you here.

Driscoll’s church has pulled together a short film to highlight Good Friday. Here’s the trailer: