Was explaining Ash Wednesday to the boys on the way to school.  I kept circling back to being aware that I’m a sinner and that Christ has come.  Then, I opened up Psalm 130 this morning:

If you, O LORD, should mark iniquities, O Lord, who could stand? But with you there is forgiveness, that you may be feared. (Psalm 130:3-4 ESV) 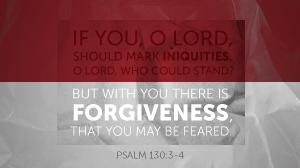 Been thinking about some great truth today from Psalm 130:3-4 — 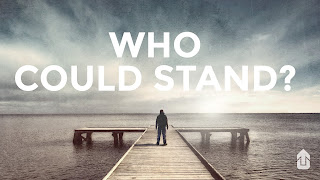 [3] If you, O LORD, should mark iniquities,
O Lord, who could stand?[4] But with you there is forgiveness, that you may be feared.

If God marked iniquities, not one of us could stand before Him. We would all have a guilty verdict upon us. But, with Him there is forgiveness and, as a result, we stand in awe of Him. Praise Him today, for the glorious Gospel realities of forgiveness that are yours in Jesus Christ.

That’s the title of a chapter we recently explored in Small Groups (Gospel Identity, Chapter 6).  Many Christians live life as if God is angry with them when they mess up.  Much of this understanding isn’t found in the reality that we are adopted sons and daughters of God, but rather in thinking of what are reality was apart from Christ.  When we discussed this chapter in small groups, there was an additional article entitled “Is God Angry With Me When I Sin?”  The issue has to do with God loving His children, disciplining them and what this looks like.  What’s the difference between conviction and condemnation?

Here’s how they answered it at the Village Church in a post entitled The Grace of Conviction:

Those in Christ have been given the Holy Spirit to lead us into more and more holiness. Conviction is one of God’s sweetest gifts to His children. Rest in His grace and walk in His glorious light! Through conviction by the Holy Spirit, God both saves and sanctifies His children.

Today, then, be reminded of what God’s done in the Gospel (maybe even by watching this video) and receive fresh grace from God to make you holy.

Watch and hear the good news of what God has done for you in Jesus.

Today’s sermon, Model Prayer (4) from Matthew 6:12 is now online. In previous posts, I’ve tried to highlight what today would be about. Forgiveness was the major theme. R.C. Sproul said praying this prayer is a very dangerous thing. Hopefully, the upshot from this is that God will work through His Word to make us people who are quick to forgive others in light of the amazing grace we’ve been shown by the Father. I hope it encourages you to do so.

This Lord’s Day, 2/13, we plan to look at Matthew 6:12 and what “and forgive us our debts as we also have forgiven our debtors” means. I’ve been greatly helped by Ken Sande and Peacemaker Ministries in my growth on this area.

Read the 4 G’s article and you will see Sande talk about the 4 Promises of Forgiveness (which I will allude to in Sunday’s sermon). Here’s the 4 Promises:

Darrin Patrick answers some questions from people in his church. In this installment: How do I forgive someone who refuses to change?

As believers, the words we use are to be characterized by letting: “no corrupting talk come out of your mouths, but only such as is good for building up, as fits the occasion, that it may give grace to those who hear” (Ephesians 4:29). In some interaction with others recently, I’ve noticed my own words are rather snarky. I confessed this to some fellow leaders and they wondered what it meant.

Wiktionary defines snarky as “Snide and sarcastic; usually out of irritation; often humorously.” It’s easy to speak words like this when wronged or when we seem to be more righteous than someone else. We can act as if we are better than our brothers or sisters. This can’t be. Let’s be loving and forgiving towards them, especially when they sin.

As we think this weekend about forgiveness and having a forgiving spirit towards others, let’s wage war on our tongues, seeking to make sure that no corrupting (snarky) talk comes out of our mouths.

This coming Lord’s Day (2/13/11) we will be honing in on Matthew 6:12 (…and forgive us our debts, as we also have forgiven our debtors.) This will be my opening illustration from Rick Reilly on Aaron Rodgers’ unforgettable forgiveness. Summarized as:

To err is human. To forgive is divine.

To forgive in the Super Bowl, even better.

There are so many lessons for us to learn from what Jesus tells us in Matthew 6:12. Join us this Sunday as we explore these truths.

In his excellent book, Pleasing People, Lou Priolo encourages us to examine where pride exists in our lives and gives some Biblical manifestations. One that emerged to me was unforgiveness. He writes:

[Pride is seen, in that] when wronged, being unwilling to forgive an offender who has not demonstrated extreme submission or repentance. Proud people struggle to grant forgiveness to those who are not wallowing in sorrow over their offenses. They want not a simple “I repent,” as the Scriptures require (Luke 17:4), but the great proof of repentance. If you’re having a hard time connecting the dots between pride and lack of forgiveness, imagine asking forgiveness from someone who responds like this: “I’m not ready to extend my forgiveness to you. You haven’t offended just any old person; you’ve offended ME! And I don’t grant people forgiveness simply on the basis of their word without their somehow otherwise propitiating my anger.” (Of course, when it comes time for him to confess his own sin, the arrogant individual expects those he has offended to overlook his “little mistakes.”)

A humble believer recognizes the enormity of his own debt of sin that Christ has forgiven and considers any offenses that he himself must forgive as minutiae in comparison (cf. Matthew 18:21-35). He willingly grants forgiveness to those who sincerely ask for it. (In the absence of hard evidence to the contrary, he takes the repentant brother at his word.) (Luke 17:3-4)

I thought this was helpful in my own life. First of all, I have had to deal with people who are prideful like this. Secondly, however, and much more grievous, I’ve seen this attitude in my own life of making someone feel the sting of wronging ME. It’s time for us to humble ourselves in light of the cross and let repentance come.